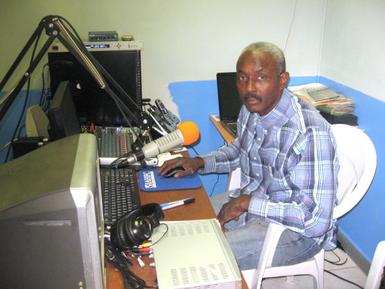 A breath of fresh airPaul Miller’s Bible Base Network 102.3 FM offers advice through sermon, music and inspiration to feed the soulBible Base Network (BBN 102.3 FM) founder Paul Miller at the controls of his 24-hour Christian radio station which broadcasts out of a 70 feet long and 45 feet wide one room structure located at Peter Street east.

Mobile AlertNews Alert
The country’s newest Christian radio station, Bible Base Network (BBN 102.3 FM) has been like “a breath of fresh air”, so much so that founder Paul Miller has received a number of testimonials thanking and encouraging him in his efforts.

“Thank your for a new and refreshing media for God’s word.”  “Found your station while looking for [another station], now I am stuck.  Love the Bible question live and the stories with Uncle Don and Aunt Carol.”  “My brother, I thank you for the powerful programming you brought to Nassau.  My office, car and home are locked in to 102.3FM.  I am a born again Christian learning much from the teachings, sermons and especially the wonderful music.”  “I am so spiritually rejuvenated that a new found peace gets me through my days of ups and downs and soothes my soul at nighttime.”  “Recently I had the pleasant surprise of coming home and walking into my bedroom to find my 16-year-old daughter in there with the air-condition on, sitting up on my pillows doing her homework with the television off and the radio on, tuned in to 102.3 jamming heavenly music.  My soul was delighted!  That scene was not an ordinary one.  I am so glad for the alternative radio option. “

Those are just some of the comments that have been posted on the Turning Point Radio Bahamas (TPRB) website by listeners to the BBN 102.3 FM station that is less than a month away from its first year (August 13, 2010) on the air, which offers a cross section of programming and individuals offering advice through sermon, music and inspiration to “feed the soul.”

“We believe that the Lord has opened this door for us [because] the world is rapidly falling apart around us and there are many of God’s dear children who are looking for hope and a peace of mind,” says Miller.  “We believe that BBN 102.3 FM is not just another radio station but a radio ministry with a divine plan totally built on the Bible, for it was Jesus who said ‘It is written, man shall not live by bread alone, but by every word that proceedeth out of the mouth of God.’”

On any given day, listeners can tune in to shows like “Live Morning Manna” at 6 a.m. with Miller himself.  There are sermons, music, interpretation of the prophecies and story time with Aunt Sherry.

Miller’s road to BBN, the station that is approaching its first anniversary, is significant for the man who was raised in a Christian home and was lucky enough to attend a Christian School, even though he didn’t aspire to academic excellence while there.  He says he received “F” grades in every subject.  He eventually dropped out of school.  Entering the adult world, he realized being a drop-out would get him nowhere in life.  He managed to somehow enroll in a program that afforded him the opportunity to receive certification in auto mechanics and transmission repair.  Miller then worked for a number of car garages around the island and in Grand Bahama before eventually taking a bride.  The marriage failed.  He sought to “drown his sorrows” partying and engaging in numerous affairs.  Miller says he hit rock bottom before being invited to church by a young lady that he fancied.  After hearing an inspiring sermon by Pastor C.D. Brooks, Miller made a decision to change his life around.  Ten years later he went into radio ministry on a local channel for eight years, from July 2002 to August 2010.

During those years a seed was planted in his mind to open his own station.  The idea germinated, and in August 2010, it became reality, even though he had been turned down for a loan by a major lending institution.

He says he was told that nobody was going to put money into a station and to not even bother with it.  But he persevered as he sought to raise the $50,000 he said he needed to support the radio broadcast network.

Miller had a website built on which he wrote a donation request letter to people telling them that Turning Point Ministries was in the development of launching a 24-hour radio station on Sunday, August 1, 2010.  He appealed for contributions to help him meet his deadline, and said their donations would assist him in purchasing two transmitter towers and all the radio equipment needed to spread the message of the gospel.

Eight months after launching his site he says people had come to his aid handsomely and he was able to launch BBN in a 70 feet long and 45 feet wide one room structure located at Peter Street east.

As his first anniversary nears, Miller’s future for BBN is for the station to be broadcast to the entire Bahamas.

The original link is http://www.thenassauguardian.com/index.php?option=com_content&view=article&id=11590:a-breath-of-fresh-air&catid=46:religion&Itemid=49